The Hapless Tourists (part one) Our fall trip started all right. A few weeks after the Humans had returned from their sad journey to Switzerland, our—as it seems to me shrinking—La Ventura (due to the expanding size of my sister, the Bernese beauty) was ready for a trip.

On the day of our departure in mid September, my over eager sister Annebäbi couldn’t wait to jump into the RV, whereas I hobbled reluctantly, given chase by the slightly nervous Female. As soon as the Wolfman pulled out our harnesses, my sister started jumping and swirling around on the bed like a mad dervish. Despite my advanced age I tried to imitate her when it was my turn to slip into the notorious restriction device. It’s a nerve wrecking task for all of us. The feline blackness, sensing the excitement well before us, usually hides in a closet where she is discovered easily by the well-read mystery fan Female who knows every trick of hiding!


It’s always the same: the Wolfman and the shrill electronic female voice that tells him where to drive are the only stress-free ones. They act fully awake, whereas the rest of us, strapped in place, accept peacefully our fate, awaiting the adventures to come.

The awful sounding GPS woman isn’t the only electronic device that reminds the Humans of their to do list. The clumsy new watch our Wolfman sports, keeps beeping ever so often when it’s time for old geezers to move around. This obviously concerns neither canines nor feline, therefore when coming to a rest stop, there is no need to repeat the afore-mentioned commotions. We reached the Kentucky Horse Park at Lexington early in the afternoon. The campground was at its best. Beautiful sites, clear sky, few campers, just the sound of birds and occasionally a horse neighing or snorting.

After a couple of days the harness struggle may subside by knowing that creature zillions my size need to wear them. Safety came to my mind. I might be a bottle short of a six pack, but eventually … well, after all, I’m part border collie.

At the Horse Park camp my Human’s finally made up their mind where to go next. Having left their homeland for good, visiting some Swiss colonies along the Ohio River in Indiana seemed like a good plan. A trip to Whole Foods Market, stocking up on esophagus-friendly food and wine, then cross country through never ending horse pastures and on a not really relaxing scenic road to the Markland Locks and Dam, crossing the river into Indiana. Past the dam, we noticed signs to go right to a casino, left to the Swiss colony Vevey—except it was spelled Vevay. We had just missed their annual wine festival. Before visiting the town that got its misspelled name from a lovely place on Lake Geneva, we spent the night in a tired, flat RV park, where large trailers sat sadly waiting for their owners to return from their gambling trips to the nearby casino. On the opposite side of the road, one can find for sale plenty of recreational vehicles that were abandoned by broke owners.

Vevay turned out to be a quaint little town whose council proudly displayed Swiss flags along the road. And there was, of course the winery, with its cheap stucco building along the highway. We never saw any vineyards not even a single grapevine. The building was closed but the Female found a bottle of Black Jack berry and cider “wine” at the local gas station. We also learned a little bit of the history of the town, which first was called Helvetia (Latin for Switzerland), but because Americans had difficulty pronouncing it, the name was change to Vevay. In my humble opinion that made it even worse. We heard people pronouncing it “wee-wee” …  Even though my Humans stopped two or three times to take pictures, they didn’t even let me out to do it! Hapless travelers, we then looked for a campground on the way to Tell City. Born and having grown up in Central Switzerland, my Female’s center of interest had turned to this town, named for William Tell, Switzerland’s national hero. Like she, just a lot earlier, Tell had lived on the shores of the Lake of Four Forested Cantons. In English it is more commonly known as Lake Lucerne, although strictly speaking, Lake Lucerne is but one of the smaller arms of the large lake.

The Wolfman reserved the last campsite (they said) in a place called Santa Claus, not too far from Tell City. Two nights required minimum stay, at sixty-four-plus bucks a night, for a ‘deelox’ site. Everybody in America with offsprings and a tent or other mobile abode has visited, heard of, or wished too see Santa’s summer residence, except for the Naegelis. And here we came, on September 18th, to Lake Rudolph Campground and RV Resort. I’ve never seen one that large. They had five entrance lanes, with little kiosks between them. I first feared we were entering a toll road and I would have to stay put for another eternity. Fortunately I was mistaken.

But my fortune didn’t last long. At first sight, the place literally looked like a nightmare. It was just the beginning of their official SEVEN-weekends Halloween celebration. Sites, trailers, golf carts, and buildings were decorated with cheap Party City, Walmart, or the likes plastic inflatable ghosts, skeletons, black costumes, ghostly stickers, pumpkins, some replicas out of popular horror movies, and assuming nothing made in the U.S.A.

Trailers, RVs and monster coaches stuck together like refugee tents in a war zone, the pathways cluttered with rental golf carts. $40 a day for a four-seater, $60 for a six-seater. No personally owned ones allowed. The same rule applies to boats, except the green painted rental pedalos on the meager “Little Lake Rudolph” pond that lacks a red nose but probably is full of manure.

Early afternoon, the trick and treating was in full swing. Hordes of rented golf buggies clogging the narrow streets, filled with Pirates, Angels, Undeads, and even some quite original masks. All along the streets, campers had decorated their sites and had plenty of treats to please would be tricksters, young and old alike.

It was very civil though. The scary looking little and large monsters were mostly driven by adults in those golf buggies. They stopped only at the decorated sites to get the treats that would probably trick some hearty bellyaches!

The Female considered the whole spectacle as a different treat. Equipped with her iPad she mingled among the happy crowd, shooting her heart out. 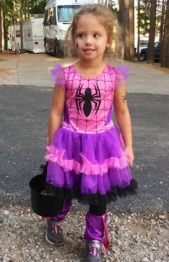 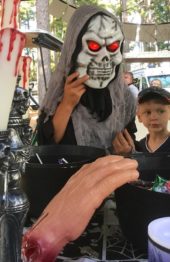 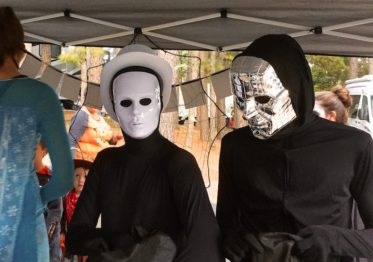 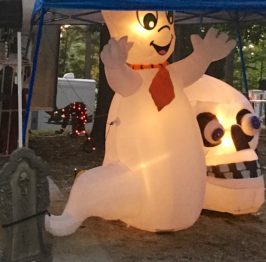